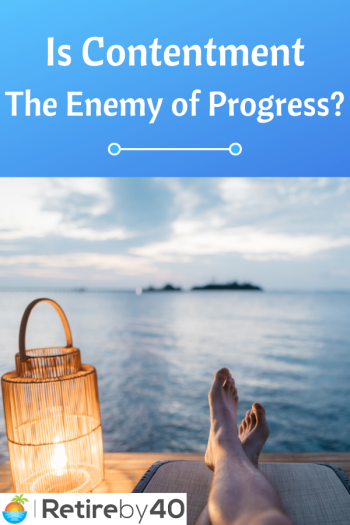 Is contentment the enemy of progress? That’s what I’ve been asking myself lately. Life has been really good over the past few years, but I feel myself stagnating. This is a huge contrast to 9 years ago when I first started this blog. I was unsatisfied with my career and I did everything I could to change my life for the better. I cut back on expenses, saved and invested as much as possible, and built alternative income streams. Eventually, I retired from my engineering career and became a stay at home dad/blogger. It paid off spectacularly. Life is so much better today than in 2010. I make much less money these days, but we still enjoy a comfortable lifestyle. I’m very happy with how it worked out. However, it feels like I’m in a period of stagnation. I don’t want to change anything because I’m content. Have you ever felt that way?

*This post was originally written in 2015. It is updated in 2019. Life continues to change.

(Circa 2015) I don’t know about other dads, but I love being a stay at home dad. I get to spend a lot of time with RB40Jr and teach him a lot of fun stuff. He was way ahead of other kids his age with bike riding, swimming, climbing trees, and swinging on the monkey bars. (He called it “guy school” and he encouraged his mom to attend.) I think most moms are a bit overprotective and don’t like their kids to take unnecessary risks. Dads encourage their kids to push themselves and learn their limits. I know that’s a generalization, but that’s what I noticed.

Of course, we had our frustrating moments, too. RB40Jr frequently acted out when he got frustrated. He banged on the wall and hit other kids when things don’t go his way. We tried to help him express his frustration differently, but it was tough for a 4-year-old boy to control himself. He really couldn’t help himself. I tried to stay calm when he did this, but sometimes I lost my temper, too. Hopefully, this phase will pass soon.

Anyway, being a dad and spending time with RB40Jr was much more enjoyable than working in an office. We had our frustrating moments, but we worked through them together.

RB40Jr is 8 years old now. He made a lot of progress since 2015! He can read very well now and still enjoys physical activities. His behavior improved slowly over the years and he rarely hits other kids anymore. He still “hates” school, but he’s fine once he’s there.

My role as a stay-at-home dad changed too. Unfortunately, being a SAHD to a small rambunctious boy was NOT really retirement. It was a lot of headaches. That changed dramatically after RB40Jr started kindergarten. Now, he’s in school from 8 am to 2:30 pm on most days. That gives me a lot of time to work on my blog and catch up on errands. This is a lot closer to retirement than when he was small. I also started coaching his soccer team this year. He’ll probably participate in more activities as he grows up. It’s great to be there for our son and see him grows up.

Blogging is a big part of my life today. Retire by 40 hasn’t changed much since I started blogging in 2010. The traffic peaked in 2014 and has been pretty stable since. The way I worked changed a bit, though. Let’s go through some of these phases.

The evolution of blogging work looks good to me. I worked about 20-30 hours per week from 2010 to 2018. However, my life improved as RB40Jr grew up and needed less supervision. Now, I work even less and have more time to relax. Hopefully, the trend will continue.

How about the blog income? Blog income is strange. The number of hours worked doesn’t seem to collate with income. 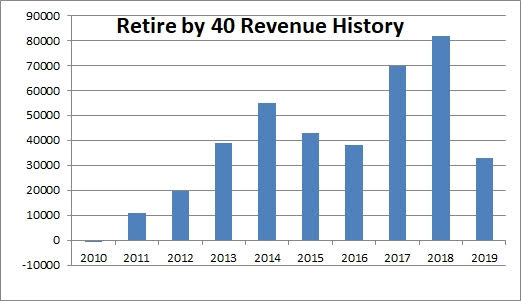 2018 was our best year and I worked less than in 2010 to 2012. I guess that’s the time investment paying off. Ideally, the income will stabilize while I continue to reduce the number of hours. We’ll see if that plan works out. Stay tuned.

Okay, I admit it. Being a SAHD to a small child is not really early retirement. It’s a lot of work for no pay. We’re moving in the right direction as my son grows up, though.

My life became much easier when our son started regular school. Now, it’s beginning to get a little busier again as he participates in more extracurricular activities. We’ll keep it to one activity at a time so it won’t get too bad.

Here is a chart I made. This shows where I spent my time on a weekly basis. It’s an estimate, but it looks okay to me. 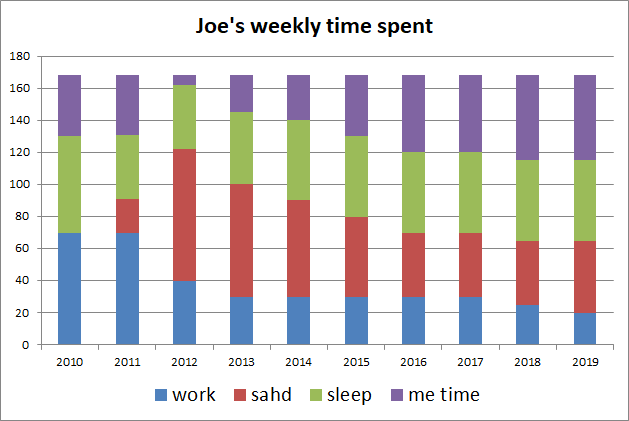 We’re also halfway through the SAHD business. In 9 years, our son will get ready to move out. Muahahaha! I can’t wait. That red bar will change to purple. It’ll be awesome.

One thing that I didn’t account for when I retired from my career was my parents’ health. This factor changed a lot over the last 7 years since I retired.

When I left work in 2012, both of my parents were in good health. My mom lived with us about 75% of the year and with my brother in California for the rest of the time. My dad lived by himself in Thailand.

In 2018, my mom was diagnosed with dementia and she couldn’t live with us anymore. I took care of her for a year, but she became too disruptive. I couldn’t leave her alone at all. That’s tough even in my situation. So we moved her to Thailand and my dad is taking care of her now. This is only a temporary solution because his health isn’t great either. I’m going to Thailand next month to help find a better solution for her. There is a new dementia care home near Chiang Mai. We’ll visit and see if it will work.

I think I’ll have to spend more time in Thailand from now on. I plan to take Junior with me for 2 months next summer to help my parents. If Mrs. RB40 retires soon, then I’ll probably spend even more time there. She can take over the SAHM role. Maybe 6 months per year? We’ll have to see how it works out. If my dad stays somewhat healthy, I might not have to spend so much time there.

Lastly, Mrs. RB40’s parents are getting older too. They’re in good health for now, but who knows what will happen in a few years. Getting old is no joke.

I felt stagnation setting in when I wrote this post in 2015. I was content, but life seemed to be static. It wasn’t like this when I was an engineer. Back then, I was learning new skills and getting promotions. It felt like progress. In contrast, my life moved at a much slower pace since I retired. My son was growing, but I still spent a lot of time being a SAHD. Now, I see it was just a phase. Life kept changing and I made some progress on my early retirement over the last few years. I’m getting more “me time” back slowly, but surely. Soon RB40Jr will be a teenager and he won’t want anything to do with me. In 9 years, he will be out of the house and I’ll have a lot more time to myself. Then, I can focus on gaining new skills and expanding my horizons. Also, I’m still content. That’s enough progress for me.

Do you ever have periods of stagnation? What do you do to keep growing?

Starting a blog is a great way to build your brand and generate some extra income. You can see my tutorial – How to Start A Blog and Why You Should. Check it out if you’re thinking about blogging.

The post Is Contentment The Enemy of Progress? appeared first on Retire by 40.