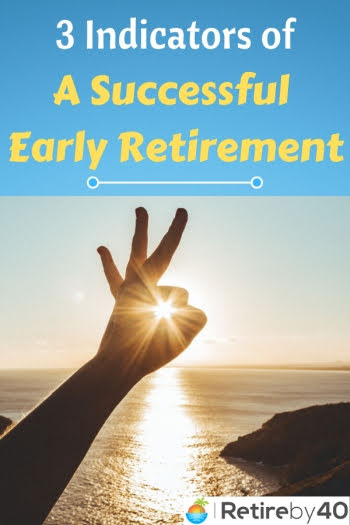 Retirement isn’t always an easy transition. After the initial honeymoon period, many retirees become bored, lonely, and even depressed. That’s understandable especially if you’ve worked your whole adult life and built your identity around a job. Work gives you structure, goals, social outlet, a sense of belonging, and income. On the other hand, retirement is totally unstructured. You have to define your own goals and figure out what to do with your time. This can be jarring if you aren’t prepared. Early retirement is similar, but a bit different, too. Early retirement is harder financially because the time in retirement is much longer. On the other hand, it’s easier in other ways. Early retirement means you haven’t worked as long so you’re not as settled into a structure. Also, early retirees usually yearn for more freedom and autonomy. Most FIRE folks chafe under the yolk of structured work. We prefer to define our own goals and work at our own pace.

One question I often get is – how do you know FIRE is the right move for you? The thing is, I didn’t know. I knew I hated working in a corporation. I figured I’d retire from my engineering career for a while and see how it goes. Luckily, life improved immensely and I’m still retired after 8 years. On the other hand, some people retired early and it didn’t work out so well. They found that early retirement isn’t quite the right fit for them. So, how do you know if early retirement is right? I came up with 3 indicators that can show you. If you hit all these, early retirement probably will work out very well for you. If not, then you might need to rethink early retirement.

Net worth should increase

Since the retirement timeline is so long, how do you know you’ll have enough money to last the whole retirement? The FIRE movement has a good starting point with the 4% rule, but 25x expense isn’t quite enough. The 4% rule is meant for a 30-year retirement period and conditions have changed since that study was completed. It probably won’t work for 50 years of retirement.

I started with the 4% rule, but I modified it.

This resets the withdrawal period to about 30 years. The 4% rule should work much better then.

We can take a look at my early retirement withdrawal strategy for reference.

This is how I planned for early retirement. We saved and invested a large portion of our income before I retired at 38. Our net worth increased sharply when we both worked full-time. After I retired, we saved less and our net worth increased at a slower pace. We’ll start drawing down sometime between 55 and 65.

How do you increase net worth after retirement?

There are many ways to increase your net worth after retirement. Here are some of them.

If you can keep your net worth increasing until you’re 55, then early retirement will be fine financially. Of course, some years won’t be as good. Your net worth might dip a bit when the stock market has a down year, but it should trend up over time.

You should be healthier

This one is a bit of a crapshoot, but you should be healthier after early retirement.

You’ll have more time to take care of yourself when you don’t have to work full-time. You can eat healthy meals, exercise more, and take care of any health issue early. I had many physical and mental issues near the end of my engineering career. My back and shoulders hurt constantly, I had panic attacks, depression, and more. Forcing my body to work in a job I loathed screwed up my health. After I retired from my engineering career, I took better care of myself and my health improved tremendously.

Of course, you can’t defy time. Most of us will have more health issues as we age. One recent retiree (reader) developed lupus and this is going to derail her retirement. If I developed a serious chronic health issue, I might have to think about going back to work, too. Healthcare is a huge problem in the United States.

You should be happier

Lastly, you should be happier after early retirement.

This one is subjective, but you should be able to judge your happiness. Most people are very happy in the initial honeymoon period of retirement. The question is whether your happiness continues to be high. Surprisingly, many people are happier working than being retired. I think this largely depends on your personality. Some people just enjoy the structure and objectives that work provides.

Luckily, early retirement has been great. I’m much happier since I retired from my engineering career. The SAHD/blogger lifestyle is a great fit for me. I have complete autonomy and I could work at my own pace. I love it. The SAHD part of it was tough early on, but it improved a ton after RB40Jr started school. Now, the SAHD part takes very little time and effort during the school year. It’s a bit harder when he’s out of school in the summer, but even then it’s not bad. I cut way back on blogging and take it easy in the summer, too.

3 indicators of a successful early retirement

Alright, what do you think? I’d love to hear from some early retirees. Are you hitting these 3 indicators?

The post 3 Indicators of A Successful Early Retirement appeared first on Retire by 40.