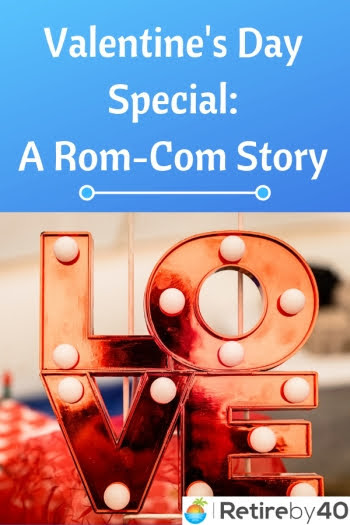 Happy Valentine’s Day! In honor of this special day, I’ll take a break from personal finance and share some stories instead. Life isn’t all about money, right? Well, I hope you aren’t suckered into spending hundreds of dollars on Valentine’s Day. Save it for next weekend, everything will be much more affordable then.

At the RB40 household, we’re skipping Valentine’s Day this year. We’re in the midst of moving to our duplex and we’re exhausted. Since we’re moving just a few miles away, we’re taking all the small stuff a bit at a time. The movers will come on Friday to help move all the heavy stuff. Lucky for me, all this is happening on Valentine’s Day week so I’m off the hook this year. Yes!

Hmmm… Maybe I should try to schedule something around this time every year. Valentine’s Day can get expensive. I just don’t like buying flowers. They’ll wilt in a few days. Why should I spend $60 on them? That’s ridiculous. I’d rather buy some nice chocolate. At least, it’ll be delicious. Okay, that sounds pretty unromantic. Don’t feel too bad for Mrs. RB40. I’ll make it up with some rom-com stories.

What happened to rom-com?

Have you watched a good romantic comedy lately? I don’t think I’ve seen a great one since the 90s. Last year, we had Crazy Rich Asians, but it wasn’t that good. The chemistry wasn’t really there. It was also missing the “meet-cute.” Booo!

Dear boy, the beginning of a movie is childishly simple. The boy and girl meet. The only important thing to remember is that—in a movie—the boy and the girl must meet in some cute way. They cannot…meet like normal people at, perhaps, a cocktail party or some other social function. No. It is terribly important that they meet cute.

I know it’s a cliché, but a fun meet-cute scene is a must. Our first meeting didn’t bode well, but somehow it worked out. We’ll celebrate our 20th anniversary this summer! I think that’s a huge accomplishment. Here is our meet cute.

I met the future Mrs. RB40 when I was a junior at UCSB in 1994. Back then, I didn’t have any money and I came up with a scheme to get a few bucks back from the university. I figured I’d start a club for Thai students and anyone who wants to learn more about Thai culture. If the university approved it, then they’ll give the club a small budget to work with. I think it was around $100 or something like that. I thought we could have pizza parties, hang out, and maybe meet some girls.

However, there was a minor problem. I didn’t know any Thai students. I had to recruit my roommates and friends to be officers of the club. Heh heh heh. I’m still good friends with those guys and (one) gal. Anyway, the school approved and we’re off. I set up our first meeting at Girvetz Hall and posted a few flyers around the campus. We were off to a good start, but trouble is on the horizon.

The power went off about half an hour before that first meeting. I figured nobody would come so I canceled the meeting* and went home. However, I got a call about 15 minutes later. A girl said, “Where the heck are you?!” Okay, jeez. I rushed to the meeting room and there she was, simmering mad. Oh boy, she must have thought I was an undependable jerk. She was right, of course. Isn’t every guy an undependable jerk when they’re 20 years old?

*Cancel the meeting – I told a couple of people that the meeting was canceled. No cellphone back then. Mrs. RB40 must have gotten my number from one of my friends that showed up and called me at home. She’s a take-charge kind of gal.

Anyway, the club didn’t do so well that first year. I was a horrible president and there really weren’t many Thai students at UCSB back then. (She is half Thai.) Mrs. RB40 became the vice president and basically ran the club. We even sold some Thai ice tea to raise money for the pizza parties. Of course, Mrs. RB40 didn’t know you have to add a ton of sugar in Thai ice tea to make it delicious. I had to rescue her from that one. Next year, she became the president of the club and made it better by including Lao students. They even put on a cultural show. Anyway, she was a much better president than I was. I wasn’t organized enough to lead. I stayed a member for the free pizza, though.

Anyway, it seems my plan worked out. I met a girl and we eventually became a couple. The club was a great idea because it gave me an excuse to spend more time with her. We made posters to advertise events and meetings, went to see movies, and had a good time in Santa Barbara. As an engineering student, I didn’t have much opportunity to interact with the ladies. I was always studying or spending time in the lab. There were very few female engineering students back then. Hopefully, the ratio is a bit better now.

There are lots more stories, but you’ll have to wait until next year. I’ll add the next episode on Valentine’s Day 2020. I need a break from personal finance once per year.

What about you? Do you have a meet-cute story? Let’s hear it. Have a great Valentine’s Day!

PS Let me know if you’ve seen a good rom-com lately. We need a fun movie to watch after we’re done moving.

The post Valentine’s Day Special: A Rom-Com Story appeared first on Retire by 40.