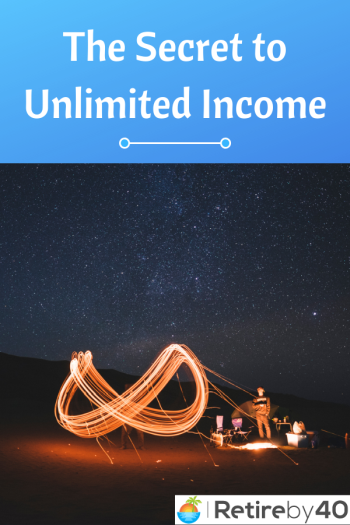 Do you believe in unlimited income? The idea is this – you can make as much money as you want, the only limiting factor is you. However, I don’t believe it. “Unlimited income” is one of my biggest pet peeves in personal finance. Everyone agrees the key to financial independence is increasing your saving rate. However, there are two camps of people. Some focus on being frugal and others emphasize making more money. The main argument from the make more camp is that you can only save so much by being frugal, but earning more has no limit. If that’s true, then everybody would be a gazillionaire by now. Today, I’ll share why I don’t believe in unlimited earnings and how to get around it.

By the way, I think you need to do both. Achieving financial independence will be much easier if you learn how to be frugal first the focus on earning more. That way, you can keep more of what you make. It will be harder if you just earn more. Lots of people have high income, but no savings because they spend it all. They don’t know how save.

Anyway, I didn’t believe in earning unlimited income. It’s not your fault if you don’t make millions every year. There are many factors that can cap your income. Let’s go through a few of them.

These are the reasons why I don’t believe in unlimited earnings. You can make a lot of money if you work at it, but it is NOT unlimited. You can’t make more and more money every year by working. Your income will hit a ceiling at some point or you won’t be able to work as hard. It’s the circle of life. The new generation will make more than you. If someone tries to convince you that your earning potential is unlimited, they’re probably trying to sell you something.

There is one exception to this. You have to become an owner. Trading your time for income won’t get you unlimited income because time is limited. The way around this is to start your own business. Instead of working for someone else, you get other people to work for you. A successful business can generate income years after years. That’s unlimited income. However, it is extremely difficult to start and maintain those successful businesses. Facebook, Amazon, and Apple are great companies today, but who knows where they’ll be in 50 years.

Bottom line – unlimited income is impossible if you are an employee working for someone else.

Another path to unlimited income is passive income. This way can be much slower than starting a successful business, but it is way easier. Anyone can build passive income. You don’t have to be Jeff Bezos or Mark Zuckerburg to invest. You can become a business owner by becoming a shareholder. Let me share my favorite chart. 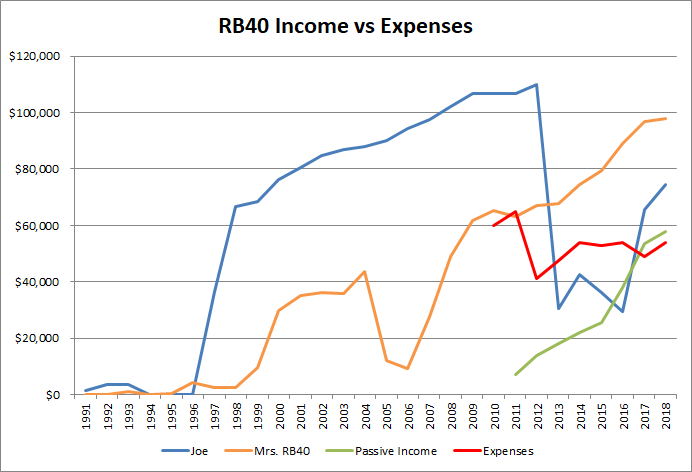 The blue line above represents my earned income. I made great income as an engineer, but it decreased dramatically when I became a stay-at-home dad/blogger. Unfortunately, I’m not one of those “talented” bloggers because my blog income is way below $10,000/month. My earned income is nowhere near unlimited. (The last 2 years were outliers. This year, we’ll be back around average again. I’ll probably make about $40,000 this year.)

Mrs. RB40 (orange line) took a different track. She continues to work and she is increasing her income through promotions and raises. Her income is awesome, but it will drop to zero when she retires in 2020. This is more typical. Most people stick with their job until they retire. Sadly, her income is not unlimited. It will disappear when she retires.

The secret to unlimited income

The secret to unlimited income is this – you have to be the owner, not the employee. You can do this by starting your own business or investing in other businesses. I didn’t believe in unlimited income previously because there are too many limiting factors on earned income. However, that was before I made this passive income vs expense chart. Our passive income is increasing and it will continue to do so as long as we keep our expense reasonable. It’s a revelation. Passive income is way better than earned income because you don’t have to trade your time for money.

Yes, work hard to increase your earned income. But you have to recognize that it is limited. You have to invest today so you’ll have passive income later. Don’t wait. That’s how you can have unlimited income.

Do you believe in unlimited income?

Sign up for a free account at CrowdStreet to check out their projects. CrowdStreet specializes in commercial properties across the USA. You can invest in apartments, self-storage, strip malls, office buildings, medical offices, and more. Real estate is a great way to diversify your investment portfolio and grow your passive income.

The post The Secret to Unlimited Income appeared first on Retire by 40.